For many people, Ross Rizzo Jr. – or at least his family – is connected to one thing: the Bernardo winery.

But Rizzo is an all-rounder who is known not only as a master winemaker and, more recently, as a restaurant owner, but also for his other career – as a professional saxophonist.

“Music is a great place,” said Rizzo of his love for music – especially jazz – since his youth.

While combining running his family’s winery with professional music performance and a career as a musician is challenging, Rizzo said everyone knows the winery comes first. He also credited his winery team for knowing their jobs so well that he can head out to an early music gig or take a short pre-pandemic tour with singer-songwriter Whitney Shay.

“I play a lot with her and the Texas tour was a lot of fun,” said Rizzo of working with Shay, who has won several San Diego Music Awards, including Artist of the Year.

“I honestly think no musician can be just a musician,” Rizzo said, explaining that they need to be multi-faceted and able to do social media, marketing and sometimes their own graphic designer. “One-dimensionality harms their music unless you’re like the Beatles. If you hit it super big (that’s fine) but 99.999 percent of those who get out of a band program (won’t get that level). “

He mainly plays with Side Hustle and Mojo Sessions, two bands he has worked with for years. Rizzo said he could see Side Hustle touring the country to perform at music festivals because of his “Jazz Funk Soul Jam” style.

Rizzo said he never thought of just making music as a career, and if he hadn’t been for the winery he would have gone into a different type of business. “I love the production of food and wine,” he said.

The Rizzo family owns and operates the Bernardo winery for the last 94 years of its 132-year existence. It is the oldest continuously operating winery in Southern California and a popular destination for locals and tourists in the Rancho Bernardo / Poway area.

Ross Rizzo Jr. with his sister Samantha Nawrocki; her mother Veronica Hall-Rizzo; and his sister Selena Roberts from the Bernardo winery.

Rizzo is the third generation winemaker and master winemaker of the winery and follows in the footsteps of his late father Ross Rizzo Sr. and his late grandfather Vincent Rizzo. The 35-year-old became director and master winemaker of the winery at a much younger age than expected. When his father suddenly died in January 2008, the then 22-year-old stepped into the role, supported by his mother Veronica Hall-Rizzo and sisters Selena Roberts and Samantha Nawrocki.

“It’s a dream to work here,” he said, adding, “I could have sold it and gone. But I felt that this is my legacy and legacy that will last forever. I wanted to be a part of it and I’m honored to have the chance. I couldn’t throw it away. That would be an insult to those before me and … to those after me. “

His grandfather bought the winery after discovering it during a trip to the area in 1927. During Prohibition, Vincent Rizzo kept the winery afloat through diversification. He made olive oil using locally grown olives and limited himself to selling sacramental wine to the Catholic Church as well as grape juice. Some said “would be fermenting when you get to the end of the dusty road that connects the old 395” website of the winery.

Nine decades later, his grandson had to run the business while weathering another crisis – restrictions put in place due to the COVID-19 pandemic.

“The hospitality and entertainment industries have been hardest hit by the economy in my opinion,” said Rizzo. “Of course, the health sector has been hit hardest.”

Rizzo said regulations to close and reopen COVID-19 are tough, although his team had a brief early experience when the winery – like all other Poway restaurants – due to an issue with Poway’s water supply and subsequent ordering of boiling water Water across the city had to briefly close in late 2019 and adapt to an emergency situation. Just as the holiday season at the winery was peaking and The Kitchen – a restaurant serving Italian recipes from his family – he opened the winery in 2018.

“It was a complete roller coaster ride,” said Rizzo.

The closure of the pandemic has not only meant that not only can walk-in winery guests be welcomed to explore the Village Shops, but also buy wine by the glass or bottle and stop by the restaurant. It also didn’t mean weddings and corporate events, nor the winery’s annual handicraft exhibitions in the spring and fall, bridal mass, and other events.

“(The pandemic) has harmed my employees, myself and my family,” said Rizzo. “But we did it and I credit everyone here. We closed for 2 1/2 months and then reopened (with restrictions and distancing). Fortunately, we were able to redesign it so it’s only outdoors … and it barely rains. “With a lot of space in the yard,” it’s so safe, “he said, adding,” We see the light at the end of the tunnel. “

While the winery was limited in operation and live music shows were canceled, Rizzo and his bandmates in Side Hustle turned to music recording.

“The recording is very different from performing live,” said Rizzo.

“It was a crazy, really big change,” he said, adding that he was fortunate that he and his bandmates could still use technology to create music that could be shared with their fans. They recorded each other individually in their homes to release new music.

“To be honest, there’s no money in there,” said Rizzo. “We only did it for the sake of common sense. Many musicians only did it to stay healthy because they didn’t play for people. … we enjoy the art and feel really empty (without the ability to share it). “

The last show he played until two weeks ago was the weekend before the stay-at-home orders were given in March 2020. “I went almost 13 months without a live show. Before that I played a couple of times a week. “His first live appearance since the pandemic was at the Sycuan Casino Resort, where he played with Cedrice, a former candidate for The Voice.

“It was scary because I hadn’t been on a show for four hours (for so long),” said Rizzo. “But man, it was worthwhile and inexplicable. People really got itchy to hear live music and be entertained. It felt good all around. “

He said the teamwork it takes to be in a band and perform in front of an audience is “so exhilarating”. 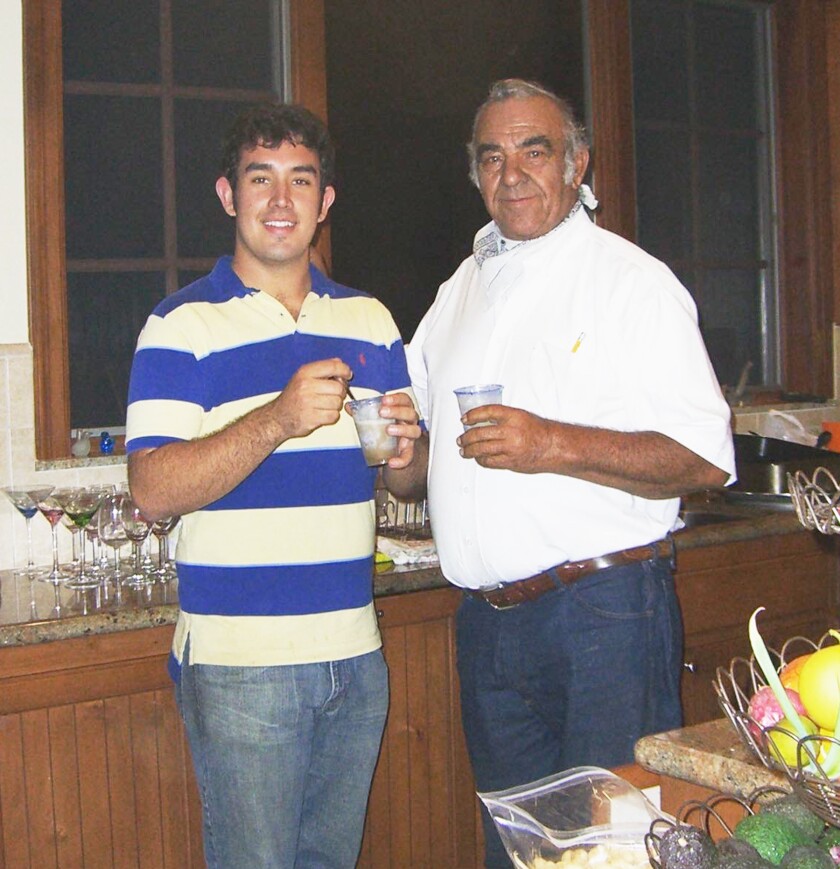 Rizzo said his parents weren’t musicians, but they encouraged him to “play something” from a young age. So he started playing guitar in elementary school. But when it came time for a fifth grade band, the Poway resident said he fell in love with the saxophone.

“I picked up the saxophone and pretty much gave up playing guitar,” he said. “I love the saxophone.” He mainly plays tenor, but also alto and baritone. “What I like (about tenor saxophone) is the space it fills sonically in the band,” said Rizzo. “It’s romantic, exciting and intense. It fits in really well with bands. “

The 2004 Poway High graduate said it was a wonderful experience for him to attend the high school music program and that he made many friends in his marching band. He also credited director Sylvester Sybilski for putting him on his musical path.

“He gave me the Tower of Power album,” said Rizzo. “It was the live (version) with a tenor sax solo … and I would listen to it in the car. I said, “I want to do this.” It was wonderful.”

Another influential experience was the performance of a saxophonist at a concert by the Dave Matthews Band. “It was full and (the audience) cheered the saxophonist.”

Rizzo also credited neighbor Jim Nantais, a jazz pianist who was accompanied by the then-teenager while performing at the Bernardo Winery. “Jim really made me play jazz cocktail stuff, which really made me love (perform).”

After high school, Rizzo attended Palomar College, where, although he was not a music major, he joined the jazz quartet. “It’s a great music program that is completely underrated,” he said. At Palomar, jazz director Gunnar Biggs and saxophonist Christopher Hollyday were mentors, he said. Rizzo continued his music studies at California State University in San Marcos, where he earned a bachelor’s degree in economics.

Rizzo began performing professionally as a teenager. Sometimes he was too young to be in a venue, like in the case of Friars Follys in Vista, where he appeared on his first live show, owner Tami Ridley had him play on the patio, he said.

Since then, he has played in shows across the area, including downtown San Diego, house parties, and the terrace of the Bernardo Winery for his weekly Sunday afternoon jazz concerts. Before the pandemic, they were from 2pm to 5pm and Rizzo said he looks forward to when they can resume. He’s been playing mojo sessions on the patio for over a decade.

Doyang Rhythms: 2 days of meals and music by Nagaland’s largest...

- April 18, 2021
Kohima: The Acoustic Club Wokha, in cooperation with the Task Force for Music and Art (TaFMA), is organizing "Doyang Rhythms: Music by the Lake"...