Modern American troubadour Ryan Adam Wells returns to the Orlando Fringe with a “sidequel” that runs parallel to, and even more movingly, his previous award-winning solo show Beers About Songs. The 500 list follows Wells and his college buddy Dave on a Rolling Stone magazine-inspired cross-country road trip that served as a catalyst for his escape from an abusive relationship.

Wells structures his narrative around the EP worth of his bluesy, country-roasted rock songs, which are both catchy hooks and musical underlines for Wells’ melodic monologues. Its flowing combination of unforgettable melodies and ironic humor is reminiscent of the classic story songs by Arlo Guthrie such as “Alice’s Restaurant” and “Motorcycle”, only with aggressive ostriches. What at first glance appears to be a picaresque piece about romantic mishaps ends as an emotional tribute to the power of friendship. Wells’ last song asks the audience to “keep your eyes open to the love in your whole life”; Take a look around the theater as its wet-eyed audience steps out and you’re sure to see love abound.

The target audience for Darths and Droids is the Venn diagram interface of people who love Star Wars (see check). People who have played D&D (check); and people interested in a scene-by-scene recreation of Episode I: The Phantom Menace (please check). Normally I’d say two out of three isn’t bad, but I’m stunned by their decision to spend an hour rehashing George Lucas’ second worst film, just with obsessively detailed dice mechanics.

If they’d started A New Hope – or even the Holiday Special – I’d probably be lining up for a second viewing right now. However, not even this hard-working crew can get midi-chlorians to work, and they threaten a clone attack next year that is certainly more irritating than desert sands. No show with Jar Jar Binks can be considered a natural 20, but ultimately, Darths and Droids makes his save thanks to a charismatic cast.

The Impossible Club, the latest show from writer and composer Ned Wilkinson and producer Christopher Leavy, is a well-intentioned, well-crafted musical about middle school bullying that ultimately made me want more. If their school has a zero tolerance policy, four warring fifth and sixth graders (Tiffany Bishop, Jacob Coldiron, Kayla Fischl, Javier Collazo Lopez) must choose between assured destruction or hostility.
Wilkinson’s upbeat pastiche score has some buzzing catchy tunes, and the cast hits their harmonies despite singing through clear face masks (which I find as useful as fig leaves from a fluid dynamic point of view).

Kenny Howard’s direction, however, emphasizes the Campier elements in Wilkinson’s sleek handwriting, which deals with a serious subject on a largely superficial level. Aside from a brief foray into self-discovery in the style of a breakfast club, the overall tone sets it all in ironic aerial quotes and it doesn’t help the audience immerse themselves in the authenticity of the characters with most actors looking at Ben Platt’s age.

The Impossible Club would be ideal material for a tour of the public school cafetories, but despite the undeniable heart that has gone into its creation, I fear it will be pushed into a locker by the bigger, stronger shows in Fringe.

Seeger
Gold venue, $ 12
Teens today may poke fun at the idea that a song could change the world, but popular music was the social medium of the 1960s, and if memes can help choose the president now, some of the credit (or the Guilt) to the pioneering folk singer Pete Seeger. As a child, I listened to the entire recording of his historic 1963 Carnegie Hall concert, over and over. So the late artist-activist was like reuniting with an old friend when visiting Randy Noojin’s eerily accurate replica.

Even if you didn’t grow up with summer camp standards like “If I Had a Hammer,” “Turn Turn Turn,” or “Goodnight Irene,” Noojin’s performance – illustrated with a slideshow of historical Ken Burns-style photos – will be impressive You with fascinating factoids from the founding years of the civil rights movement. I never knew before that Seeger taught “We Shall Overcome” to Martin Luther King Jr., who included his lyrics in his sermons, or that beloved ballader Burl Ives suspended fellow communist Joe McCarthy’s HUAC hearings.

Noojin not only captures Seeger’s unmistakable singing voice and flowing banjo playing (which becomes the subject of self-deprecating jokes), but also his warm, optimistic personality. Audience participation was a kind of religion to Seeger, and Noojin’s enthusiastic admonitions to sing out loud might make some masked spectators a little uncomfortable. But I am willing to bet that by the time Noojin graduates with the legendary Cuban protest song “Guantanamera” he will have won over a number of newly minted Pete Seeger fans in his audience. 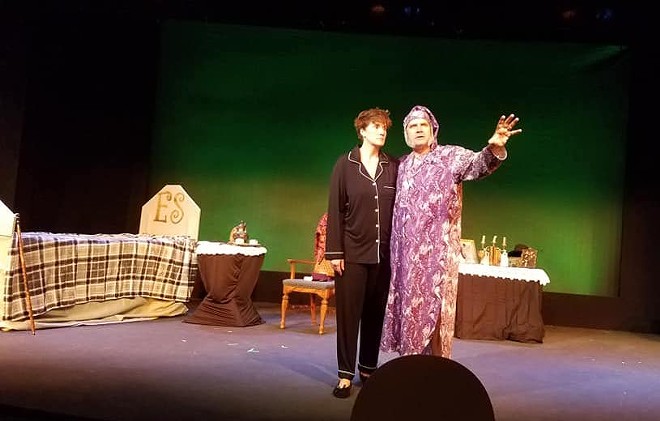 Everyone knows the Scrooge name is synonymous with avarice, but what if good old Eb’nezer (the second E is silent) was just the victim of a vengeful Chuckles Dickens who was still bitter about a bad book review? In what? The Dickens! Writer Patrick Prainito reworks and expands a key conversation from the classic Christmas story, giving Scrooge (Bill Keevan) the opportunity to tell his side of the story to an increasingly confused Jacob Marley (Tracy Perry).

It turns out that “bah humbug” is really a blessing, Belle was a gold digger, and even the innocent Tiny Tim was actually a 28 year old cheater. It is up to the audience to decide whether Scrooge has really been unjustly maligned or whether he is simply engaging in an epic act of gas light in this curious curiosity.

The tightly layered references – not just to other Dickens novels like Oliver Twist and Great Expectations, but to Chippendale furniture and Rocky Horror – might be a little too smart for the show’s own good, and slow cue pickups occasionally paused on opening night the river. However, if you’re a pedantic English major with a penchant for Monty Python-esque parody, what? The Dickens! will be right in your Whitechapel alley.

– –
Keep up to date with news and views in Central Florida with our weekly newsletters and support this free publication. Our small but fine team works tirelessly to bring you the latest news from Central Florida, and every little bit helps.

- June 21, 2021
With the COVID restrictions lifted, we see many of our beloved events return. Music festivals are returning like Summer Fest (again in September),...